From the steel pans to calypso, from the big drums to soca, authentic Caribbean Carnival music has always been a key element in Leeds West Indian Carnival. 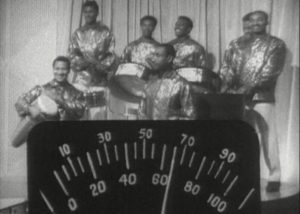 Within a few years of SS Empire Windrush brought the first wave of Caribbeans to the UK, West Indian culture and music had begun to weave their way into the fabric of British cities. In Leeds one of the first steel bands formed was Caribbean All Steel (also known as Caribbeans), established in the mid 1950’s. Led by cousins Wilfred Alexander and Irvin Stephens, with smooth vocalist Sonny Marks, the band was the first steel band to appear in, and win, an episode of the popular ITV talent show Opportunity Knocks in 1965. Watch their performance here 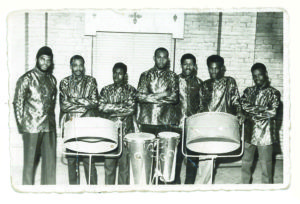 When Arthur France and the Carnival Committee organised the first Leeds West Indian Carnival in 1967 they knew the importance of including traditional Caribbean music.  Four steel bands and a big drum and fife band entertained crowds at the first carnival. Steel bands inspired by Trinidadian counterparts, filled Potternewton Park with the sweet sounds of the Caribbean before taking part in the processions on homemade trolleys pulled along on ropes.

The 1967 carnival attracted steel pan bands from across the UK. Bands from Birmingham, Manchester, and Leeds all completed in the steel band competition held at the Leeds Town Hall. The Gay Carnival Steel Band had been formed by Arthur France and Courtland Carter especially for the carnival. The St. Christopher Steel Band took first place with their performance of Elizabethan Serenade. 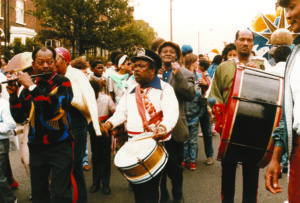 Captain Wenham’s Masqueraders troupe performed on the road for the first time, bringing a rich Caribbean tradition, also named as Jonkunu in some islands, to the streets of Chapeltown. The group was made up of Henry Freeman on big drum, Prince Elliot on kettle drum and Kenneth Brown on fife. A dancer with the troupe, Albert Henry joined Prince Elliot on kettle drum the following year.  Later additions to the troupe included Mitch Wallace (Godfather). The self-taught musicians would play on the road for the next thirty years.

A Calypso King contest was also held in 1967. It was won by Lord Silky with his self-penned song St. Kitts is my Borning Land.  Listen here 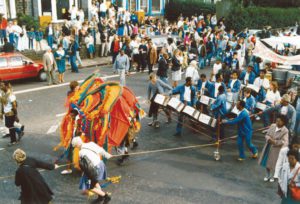 After a hiatus lasting several years, the Calypso King contest returned in the late 90’s. The popular show was renamed the Calypso Monarch contest in 2008 when Soca B became the first woman to win the title. The show has again been renamed in 2016 as the Soca Monarch Show in an attempt to include more contemporary carnival music.

Steel bands continued to be the dominating sound of Leeds West Indian Carnival throughout the 1970s. Bands assembled at Potternewton Park where they would perform to the crowd eagerly awaiting the carnival parade.

The steel pans would then be mounted onto homemade wooden floats that occasionally used appropriated wheels from shopping trolleys. Pulled along by ropes for the entire route, which went into the city centre and back, the steel band floats could bring the parade to a standstill if a wheel came off.

By 1977, the carnival saw a new generation of pan players emerging. The Ducie High School Steel Band (from Manchester) and a steel band from Leeds made up of young players joined that year’s parade. Watch steelbands from Leeds and Manchester preparing for Carnival 1977 in the BBC’s Countdown to the Festival documentary from 16:56 onwards here

The New World Steel Orchestra was founded by Arthur France in 1984. Their first instruments were second hand pans bought from London’s Ebony Steel Band. Among its first members was Melvin Zakers who had taken an interest in steel pans after messing around with the instrument at the Chapeltown Dance Theatre around four years earlier. He later joined Paradise Steel Band, formed by St. Clair Morris in 1972. Mr Morris who passed away in 2017 was hugely influential and was the city’s first steel band teacher. Watch BBC Look North coverage about his life and contributions to steel pan music here 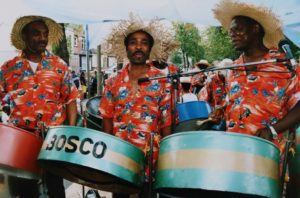 Bosco Steel Band were regulars at the Carnival parade in the 70’s and 80’s. Photo: Max  Farrar

As steel pan’s heyday reached its peak in the 70’s and 80’s, bands that were a regular and expected feature at Carnival included Bosco, Wilberforce, Esso, Paradise, Caribbean’s, North Stars and Contrast. 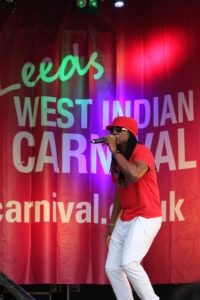 The New World Steel Orchestra has been a part of Leeds West Indian Carnival for almost 35 years and is now the only steel band from Leeds to take part in the parade.

Leeds had had a thriving sound system culture since the mid-seventies and although sound systems playing reggae music had been introduced to Notting Hill Carnival in 1973, the Carnival Committee insisted on soca, pan and calypso music being the only genres to be played at the Leeds event. This steadfast approach has helped to ensure that Leeds Carnival retains its authenticity by reflecting Carnivals in the Caribbean.

To introduce the increasingly popular soca music, sound systems were included in the Queen Show in the early 80’s alongside steel bands. Mackie’s Disco was one of the first, entertaining the audience at the 1982 Queen show.

Some of the world’s most celebrated soca and calypso artists have graced the stage at the Last Lap Show – so called to reflect the euphoria on the last leg of Carnival parades – which was held on Carnival night until the mid 2000’s. Performances by legends such as The Mighty Sparrow, Arrow, Byron Lee & the Dragonaires, Black Stalin, Burning Flames, David Rudder, Alison Hinds and since 2014 at the King & Queen Show by Kerwin Dubois, Edwin Yearwood have thrilled audiences. 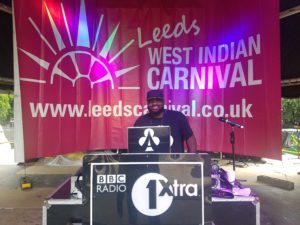 Meanwhile in the early 80’s young Black Britain was more in tune with reggae music from Jamaica and home grown talent. Sound systems including Maverick International, Sparta, Blacka Spot and Genesis began to appear in Potternewton Park and along the parade route. 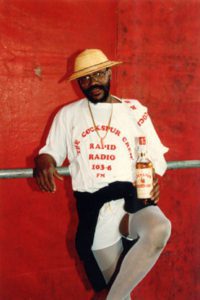 Mitch ‘Godfather’ Wallace in one of his many Cockspur Crew get-ups ready for J’Ouvert Photo: Max Farrar

Soca DJ Godfather was crucial in introducing sound systems on the road in the early 90’s. After convincing the Carnival Committee that he would only play soca and calypso music, he took his speakers on the road for the first time in 1991, playing tunes by Mighty Sparrow, Arrow and others. To prevent the speakers drowning out the sound of the steel bands, the sound system was placed at the end of the parade, where it remains in today’s parades. 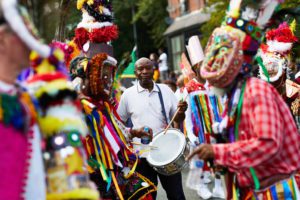 Godfather also convinced the Carnival Committee to introduce J’Ouvert Morning to Leeds West Indian Carnival to celebrate its 25th anniversary in 1992. The first J’Ouvert Morning saw Godfather on the road with one trolley pulled by a tractor that was followed by a small crowd. In remembrance of the ancestors, it is tradition to play a recording of big drum and fife music during J’Ouvert Morning.

Today soca reigns supreme, with monster hits by huge stars such as Machel Montano, Kes the Band, Bunji Garlin, Destra, Ultimate Rejects and more. But, through it all, whilst catering to changing tastes, Leeds West Indian Carnival shares the musical culture of authentic Caribbean Carnival with audiences with a love of steel pan, soca, calypso and traditional big drum that despite their long history and heritage, continue to captivate audiences today.